Difference between revisions of "Arms of War: Generals Tutorial"

From PBBG Wiki, The enyclopedia of Persistent Browser-Based Games
Jump to navigation Jump to search

This is a tutorial for new players on how to play their first few games in Arms of War: Generals.

To join, you have to first go to the lobby page. This will house all of the different games that are currently playing. All games require atleast two people to be in a queue in order to join, one for the red team and one for the blue team. If someone is in the Any Queue, then they can join either side.

Click on the 'Join Queue' button and choose which team you'd like to join. If someone is already in the opposite queue (or the Any Queue), you will automatically join the match. If you're waiting, a notification will appear on your screen (while you're on any page) telling you that you've joined a game! 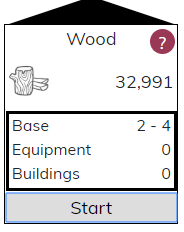 Collecting resources is a purely idle activity. By default, you start the game collecting wood, whether you've actually entered the game or not. In order to collect 1 resource, you have to complete the total Task Cost by making an idle attempt every second. The amount reduced is calculated to be between your Base value, which is usually a number range.

These resources are the basics to training conscripts into actual soldiers, some of whom are dangerous!

Peasants whom are drafted into war by their King! You just have to... help encourage their patriotism.

Collected from the battlefield by killing enemy soldiers or dealing damage to the enemy castle. Everyone on your team gets a share of the loot, because we're decent human beings.

Created by using your extensive background in magical chemistry, these crystals can come in varying qualities.

(Note: Crystals are not currently implemented in the game)

Your team is all sharing the same castle. You and your team mates can donate your resources to your castle, which will be used to increase the castle's tier. In doing this, it provides benefits to the entire team. Below are the things that can be increased with tier, some of them benefit resource collection, some of them benefit the castle itself.

Your castle will heal this amount every 200 seconds.

Incoming damage will be reduced by this amount for every unit that hits.

This will multiply every bounty earned for the entire team.

This will multiply the rate at which you recruit conscripts

This will modify the minimum tick value for wood, food and iron.

This will modify the maximum tick value for wood, food and iron. 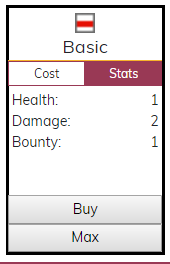 Castle Units are purchased from your individual resource stockpile. Once purchased, they will go into a Reinforcement Queue. Every 10 seconds, a unit will be spawned on to the battlefield in the order it was purchased in.

Units purchased will march toward the enemy castle on one of 4, randomly chosen lanes. If a unit meets an enemy unit on the battlefield, they will fight each other, doing damage simultaneously. If a unit dies, the opposing team will receive gold equal to that unit's Bounty. If the unit is lucky enough to make it all the way to the enemy castle, then it will deal damage to the enemy castle and give your team the Bounty value instead.

(Note: If your unit doesn't deal enough damage to overcome the enemy castle's 'block' amount, no gold is rewarded)